REDMOND, WA - You may have heard of virtual reality before in one of our previous stories, but augmented reality takes that technology one step further. With augmented reality, virtual objects are projected right in front of you, allowing you to interact with them as you would with any physical object. Microsoft’s HoloLens is helping to make this possible. Keep reading to see how this technology can help your business.

Check out the full article in The Snack magazine by clicking here, or continue reading the full piece below.

I Want The Snack Magazine!

Is that greenhouse in your living room just a figment of your imagination? Not quite. With Microsoft’s HoloLens, seeing is truly believing.

A new era of holographic computing is upon us. With some analysts projecting the augmented reality market to hit $120 billion in revenue by 2020, this new vision of the future is capturing the hearts and minds of tech giants from Google to Facebook to usher in a wave of groundbreaking technology. Who would have thought that we’d be wearing headsets that could allow us to walk and interact freely with three-dimensional, holographic objects in a virtual world, or even a virtual greenhouse, from the comfort of our own La-Z-Boy or office chair? Microsoft’s newest tech gadget, HoloLens, is making it all possible. Whether you’re a farmer planning his or her next crop, a real estate developer or retailer experimenting with architectural possibilities, or a marketer looking to sell in an innovative way to a mass audience, look no further than augmented reality. 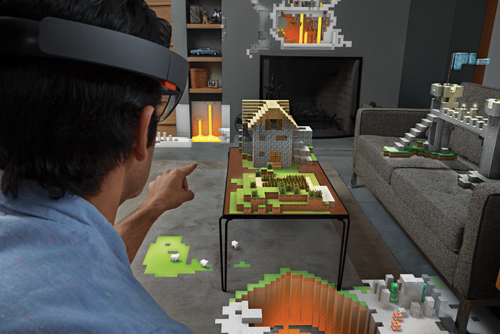 What is Augmented Reality?

My first experience with augmented reality, or AR, was bizarre to say the least. In front of me, standing in my living room, was a virtual, miniature 3D cartoon character interacting with real-life objects like a chair or my sofa. The character, which was projected on the screen of my smartphone, would sit down on the couch or walk around the room avoiding objects in its path as if it were actually there with me. What appeared to be some form of clever witchcraft was actually the latest innovation in virtual reality.

AR is a type of technology that combines the real world with the virtual, or rather, attempts to make the virtual world indistinguishable from the real. A computer generated image is superimposed onto a real-life scene so you can interact with it. Microsoft’s HoloLens takes this concept a step further. Here’s how it works:

At first glance, you might think it would be silly to strap a bulky, Robocop-like headset onto your face. While most examples of augmented reality don’t require futuristic goggles, HoloLens comes equipped with advanced sensors and hardware that captures information about what you’re doing and the environment that you’re in to project a computer-generated image of anything that you could possibly imagine, depending on the software.

Using state-of-the-art gyroscopes and accelerometers, the device tracks and captures information about every subtle movement you make. It understands your physical whereabouts in the environment such as your position and movement in space, your head and hand gestures, and even your gaze. Like other AR technology, HoloLens also tracks objects in the environment to project images inside or on top of them. Say you want to look at a plot of land on a farm in the comfort of your office. You could project that image onto a desk or coffee table and mold it to your specifications like you would a piece of clay or sand in a sandbox. You can even fully immerse yourself in the field right in your office, but these examples barely scratch the surface. 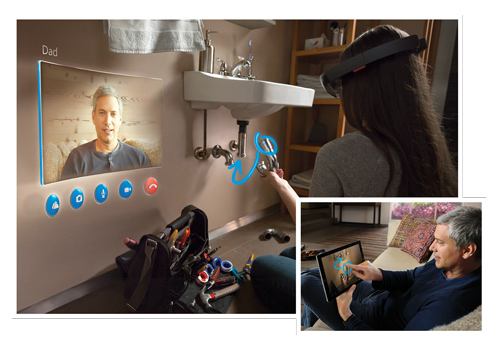 When you first slip on HoloLens, you’re not going to see a virtual world like you would if you were to use an Oculus Rift or Samsung’s Gear VR. Instead, you would only see the world around you as if you weren’t wearing the headset at all. In fact, there’s actually a big difference between augmented and virtual reality.

The goal of virtual reality is to immerse users inside a virtual world that’s been created by a software developer, hence the name. It’s more akin to a video game, but there are commercial uses for the technology that are available, like videoconferencing for example. Augmented reality, however, seeks to help users better interact with the real world using high-definition holograms.

For better insight into augmented reality technology, check out some of these examples to see how your business could benefit from Microsoft’s HoloLens.

Out on a business trip, but you need to get a closer look at what’s happening on the field in real-time? Whether you’re across the globe or just feet away, HoloLens allows you and a colleague to see the world from each other’s perspective. Additionally, if either of you have a tablet on-hand or a PC nearby, you can also draw instructions that would appear as holograms in the real world.

Have ideas for expansion? HoloLens allows you to create holograms to visualize how something will look in the real world, whether it’s new desks in the office, a new greenhouse, packing facility, or more.

Want to re-design your store layout? You can pin a blueprint of your store on a table and use your finger to trace your ideal arrangement. Once you’re finished, you can project that environment as a hologram and explore it to your liking in the real world.

Have new POS material, but not sure where to place it? Create full-scale holograms and share them with your colleagues.

Want to plan a new distribution center? HoloLens is an architect’s dream come true. By using full-scale holograms, you can better communicate your vision to construction industry professionals.

The Future of Augmented Reality

According to a report from Digi-Capital, augmented reality will hit the mainstream by 2020, meaning it could be a major revenue source for enterprise, advertising, TV/film, and consumer apps such as Facebook. With forecasted revenue of $120 billion by 2020, there is a huge opportunity for businesses to bring their brand to a whole new dimension.

Tim Merel, Managing Director of Digi-Capital, said that augmented reality could “fundamentally disrupt mobile” and that the next Apple might come out of AR. 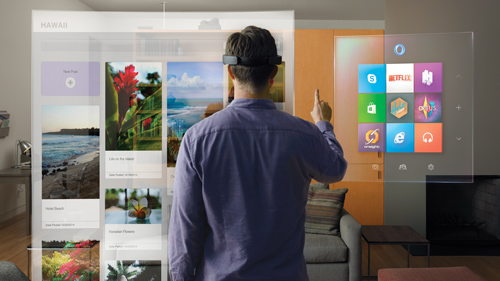 “AR could disrupt the mobile market, and Microsoft’s HoloLens could be the start of regaining the glory lost to Apple in the last decade,” said Merel, who believes that augmented reality’s addressable market is similar to the smartphone/tablet market.

What was once only thought possible in science fiction is now a reality. With AR technology like Microsoft’s HoloLens, we can now communicate on a level never seen before. Businesses across the produce and retail industries can work more effectively with holograms and collaborate in an entirely new dimension. Indeed, holographic computing is here.